Recording foley and vocalisations in my home studio room was often quite challenging:

The room itself is too reverberant, the old windows allow lots of street noise to pass through, and even my rather quiet PC can be heard when recording soft sounds. Furthermore I felt that it would help when our neighbours below would not have to witness anymore my attempts of doing Dragon mating calls at the top of my lungs.

After too many times desperately trying to record sounds surrounded by sheets on whacky stands while waiting for a gap in the cars passing outside I needed a better solution.

In our house we have a small room under the roof with roughly 9 square meters. Due to its small size and the resonant wooden floor it is far from being the ideal recording chamber, but it is the only room with no windows and that is not in use. As a first treatment I attached a set of 10 acoustic panels made of Basotect foam (100*50*10 cm) to the walls and roof to reduce resonant flutter echoes. To seal the gap with the ladder down to the floor below I bought a board made of spruce wood and attached a handle so that I can close the opening when recording. To seal the seams between the opening and board I covered the front and the sides of the board with acoustic foam and fabric, which works surprisingly well for blocking sound from passing through. 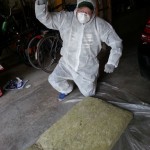 Working with Rockwool requires some protection (the Breaking Bad look) 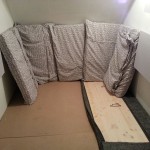 Wooden board with foam shutting the gap to floor below 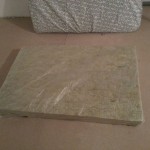 Rockwool wrapped in plastic foil and sealed with tape 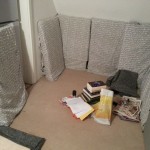 Corner of chamber with some Rockwool pillows IKEA-style

The room itself was yet too reverberant despite the Basotect panels, with nasty flutter echoes still present in some corners. There was also the general issue of the high frequencies becoming dead while low mids and lows still resonate and create that typical boomy-boxy sound of a small badly treated room. For sophisticated solutions to treat the low/low-mid range like bass traps or Helmholtz resonators I did not have the time or knowledge to set them up properly; so I simply went to the tool shop again and bought a big pack of Rockwool. Rockwool is much cheaper and also more efficient in the lower ranges than Basotect; on the other hand it requires some additional measures to prevent the fibres from going into the treated room. By wrapping the single slices of the Rockwool package into plastic foil and sealing them with tape I could get a dozen more elements, each again 100*50*10 cm. Covering these elements in cheap sheets from IKEA slightly increased the wife acceptance factor and made them also easier to handle.

By stacking these Rockwool „pillows“ in one side of the room I usually get a pretty dead corner with not too much boomy reflections, which is good enough for close miked sounds. As a side effect, these pillows also come in handy when I want to record things in other rooms of the house and treat a few room reflections. The whole set up is still far from the results of a professionally treated recording room with decent size, but at least the days of recording vocalisations in my bed while being wrapped in the sheets are gone 🙂